It makes me angry that I live in a country where some people love their guns more than they love their children.  The massacre of seventeen innocent children and teachers in Parkland, Florida has sparked a debate which has found children standing up to elected officials and the gun lobby, demanding gun safety and reform.  One of the most absurd ideas is arming teachers.  That teachers, in addition to all their other responsibilities, must worry about keeping their students safe from intruders with guns by “packing heat.”  That in our own state a person running for Congress is giving away an AR-15 as a prize!  Since Sandy Hook in 2012, there have been 239 school shootings nationwide; 438 children and teachers were shot, 139 were killed.

Who are we?  What is wrong with us?  How did guns become so deeply embedded in our 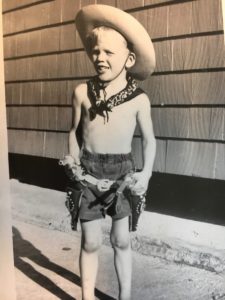 culture?  I grew up in a small Midwestern town.  My father was a hunter.  My brother, too.  The rite of passage for boys was a BB gun at age 8, a .22 caliber rifle by age 12 followed by a .410.  My childhood was  spent playing Cowboys and Indians, wearing a toy six-shooter on my hip and riding around the neighborhood on a stick horse shooting bad guys.  My heroes were Roy Rogers and the Lone Ranger.  The photo above is of me and my friend Deanna Stevens.  We had been riding the range all morning and paused just long enough to fill our canteens when someone snapped this picture.  Keith grew up in Texas also riding the  range with double pearl-handled six shooters at the ready.

Where did we get this warped idea that guns were ok?  From westerns and television?  Have we sugarcoated our past so we  don’t have to face the fact that we committed genocide against 100 million indigenous people and brought slaves to this country to build our infrastructure?  Is that what we do in this country, sugarcoat our past so we can live with ourselves?

Fast forward to the present. Does the second amendment really give us license to carry military grade weapons?   Constitutional scholars say it does not.

My grandson is now a freshman at Free State High School and is deciding what courses he will take next year.  For his history course, he wants to take Native American History and Black American History, but has been told that if he does, those history courses will not qualify him to attend a four-year college; they are electives.  The required history courses are European History and World History.  Instead of studying history from the point of view of the vanquished, we must study from the point of view of the victors?

Is this why we are so in love with guns because we never study the real history of this country?  Why don’t we study Howard Zinn’s book The People’s History of the United States? Or Leonard Pitts’ book Freedom about what happened after the Emancipation Proclamation?  Or at the least integrate the struggle and accomplishments of countless marginalized populations?

How did corporate interests become more important than the will of the people?  Isn’t it time to get rid of the Supreme Court decision Citizens United which allows monied interests to control our lives and the lives of innocent children?

Our grandchildren have a way of shining a light into our lives and making us see the world differently.  Just as those students in Parkland who courageously spoke truth to power, standing up against a system that allows the NRA to force schools into becoming battlegrounds and children to die at the hands of young men carrying high-powered guns that can kill 17 innocent children in 6 minutes.  They say, “Enough is enough.”  Enough is enough indeed.

There are a number of walk-outs and marches planned across the country.  Something on a massive scale has to be done.  No matter how many safety procedures we implement, without a drastic change in our laws and seismic shift in our thinking, this will happen again.  And again. No more sugar-coating who we are.  Our children are watching.