For over a year, 10-year-old Dylan Tenbrink has been standing outside Raintree Montessori School on Friday mornings, protesting about climate change with her sign, “Our planet, our future.”

Dylan, a fifth grader, became inspired to speak out about the climate after watching a short video about Greta Thunberg, the 17-year-old Swedish climate activist. “She had a really strong voice and she was able to be heard,” Dylan said of Thunberg. “She had strong feelings about the climate, and I think that is pretty cool.”

This Friday morning, about 10 classmates joined Dylan for her protest, many holding signs — and some dressed in their Halloween costumes. (Dylan is going as Bob Ross this year, but she said she was planning to change after the protest. Last year, she addressed up as Thunberg.)

Dylan’s teacher, Ben Rumback, said Dylan’s actions fit the school’s philosophy. “The whole concept of Montessori education is to spark interest in the child and let them follow to their satisfaction,” he said. “So Dylan was protesting all last year, every Friday, often alone, inspired by Greta Thunberg. And slowly kids started joining her.”

When Raintree reopened after the COVID shutdown, Rumback said classrooms were shuffled and that Dylan was placed in his classroom with some new classmates who were “all inspired by her passion.”

Dylan’s mom, Jamin Tenbrink, said she’s proud of her daughter’s commitment to the cause. “I think it’s good for her age to be that committed and dedicated to something that’s important to her,” Tenbrink said. “She wants to be vocal about her future.” 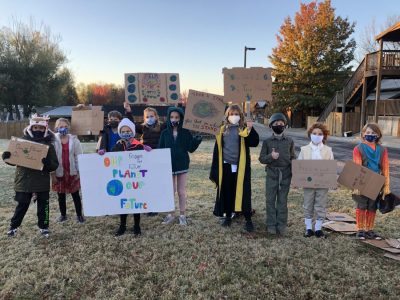 Whereas Thunberg often misses school on Fridays to strike outside the Swedish Parliament, Tenbrink said she and Dylan made a joint decision that Dylan would protest every Friday, but prior to the start of school.

In addition to her school protests, Dylan also organized a climate strike on Saturday in South Park. About 30 of her classmates and their parents joined for a march up and down Massachusetts Street and a few laps around the South Park gazebo.

Dylan said improving the climate was important to her because humans have known about climate change for a while but “we’ve just made it worse.” “I think we could slow it down if we all really tried,” Dylan said. “I mean, I know not everyone is going to try, but at least some people can.”